Do Millennials Really Know How To DIY? 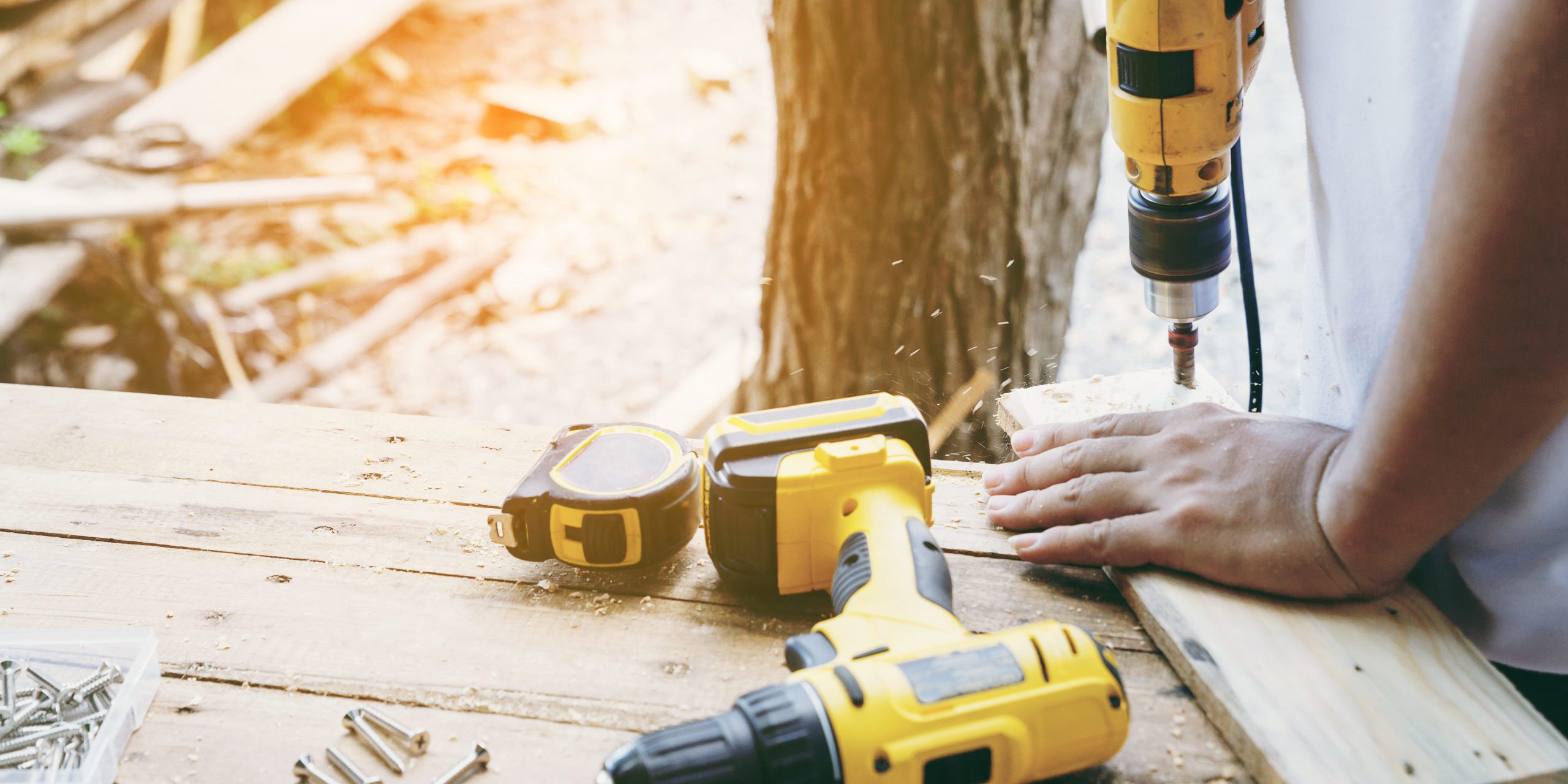 Call it the HGTV effect, or blame the viral influence of Pinterest. Young Americans are increasingly interested in home improvement, whatever the reason, and many are taking matters into their own hands. According to one recent survey, millennial homeowners now spend about $26,000 annually for home upgrades each year. And much of that spending is for DIY projects: Retailers have seen an uptick in purchases among young customers buying supplies.

But does this enthusiasm translate to real home improvement know-how? After all, older generations are always faulting millennials for their lack of humility and focus, essential ingredients for DIY success. Can baby boomers and Gen Xers still teach the digital generation a thing or two about homeownership?

We decided to find out, asking members of each generation to assess their handiness around the house. We then put their assertions to the test, asking which repairs they’ve actually done. Finally, we quizzed them on basic home maintenance knowledge to see who possesses the real expertise. Our findings? Millennials think they’re adept at a variety of home improvement tasks—but in experience and knowledge, the numbers show differently. 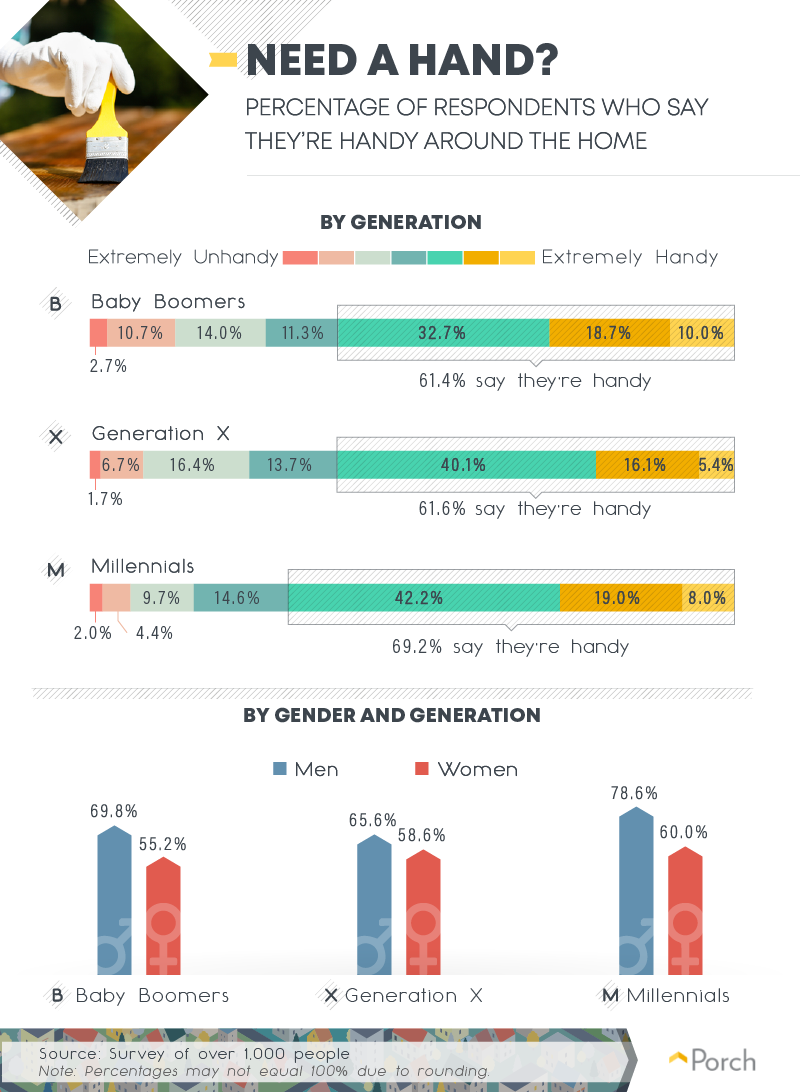 While a significant portion of each generation claimed it was pretty handy, no group touted its home improvement skills more highly than millennials. This confidence was particularly apparent among that generation’s men, of which 78.6 percent identified as handy. By contrast, fewer than 70 percent of Gen X and baby boomer men said the same. Similarly, a greater percentage of millennial women claimed the “handy” mantle than in any other generation. 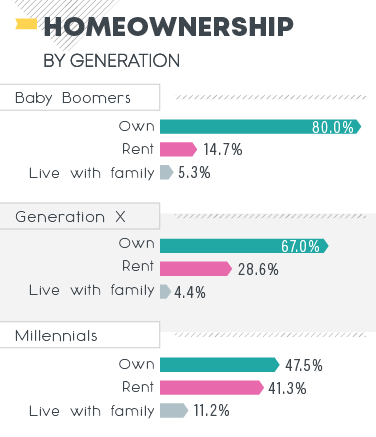 Based on millennials’ self-assessment of their skills, their generation’s reputation for being hopeless at home maintenance may be unwarranted. Young Americans have held off on buying homes longer than generations prior, so they may be used to calling someone else to handle maintenance. Indeed, among respondents, millennials had far lower rates of homeownership than older generations—leading us to wonder how they learned the handy skills they claim to have.

Are millennials exaggerating their proficiency when it comes to repairs, or do they get too little credit when it comes to practical skills? To find out, we ask for more detail about their handy habits, including who takes the lead when something breaks. 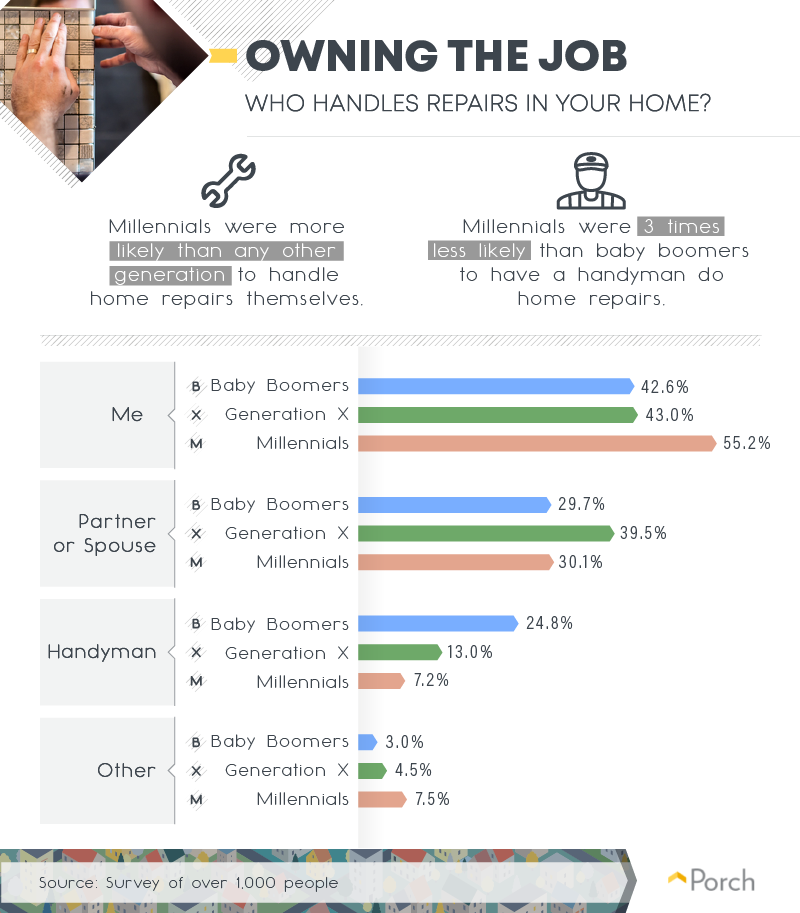 When something at home stops working, calling a professional can spare stress and uncertainty. But for the majority of millennials, that path seemed too easy—or costly. Fifty-five percent preferred to handle repairs themselves, compared to roughly 43 percent of baby boomers and Gen Xers. Home improvement retailers are hoping this DIY ethic persists among millennials as millions leap to homeownership after holding off for years.

Gen Xers, conversely, relied on their spouse or partner for repairs more often than other generations did. Baby boomers were the most likely to hire a professional, though, perhaps because they’re growing old enough to be more hesitant to safely perform some repairs themselves. Recently, contractors nationwide have benefited from a surge in baby boomers remodeling their homes to accommodate them better as they age.

Calling oneself handy is one thing, but acquiring a record of successful fixes is another. When we asked each generation what repairs they’d performed in the past, millennials had the most limited track record, despite their self-professed competence. In fact, for 13 of the 21 repairs studied, millennials had the least experience. When they did surpass other generations, it was often due to their superior tech savvy: They were most likely to have set up a wireless router and mounted a TV, for instance. Millennials were also more likely than their older counterparts to perform some other varieties of “adulting” unrelated to home repairs, such as an oil change or cooking for a dinner party.

It might be easy to dismiss the gulf between millennials’ DIY confidence and their experience as mere arrogance. But perhaps older generations have simply had more time to experience all the challenges of homeownership and reassess their own skills accordingly. After all, if you’re only familiar with simple fixes like installing a showerhead, you might draw the erroneous conclusion that all home repairs are as easy. So in addition to quizzing participants on what they have done in the past, we asked them what they knew about home repairs. 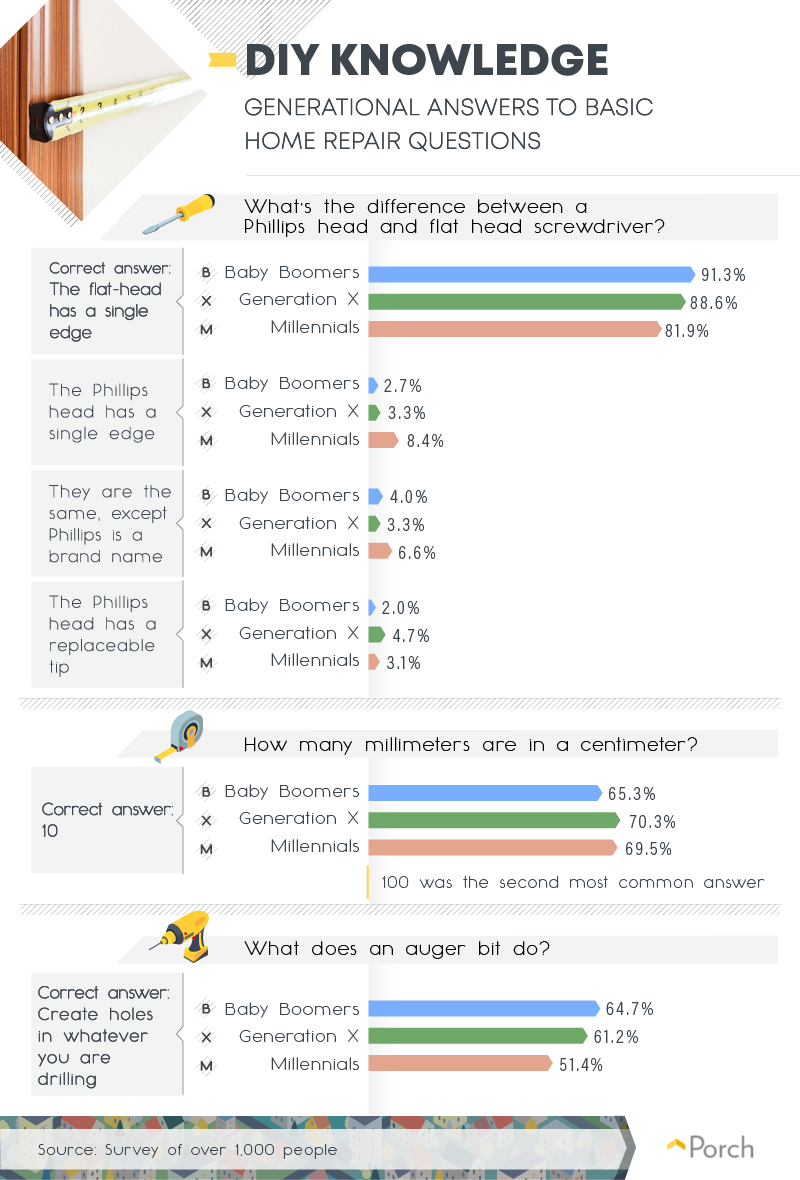 To further study differences in DIY project knowledge among generations, we quizzed respondents on basic facts that informed home improvement projects. In this regard, nearly 1 in 5 millennials could not correctly identify the difference between a flat head and a Phillips head screwdriver. Among baby boomers, by contrast, less than 10 percent made this error. Even on slightly more difficult subjects, like naming the purpose of an auger bit, the oldest generation surpassed younger counterparts. Nearly two-thirds of baby boomers could do so successfully, compared to just 61.2 percent of Gen Xers and 51.4 percent of millennials.

Younger folks did outperform older Americans in one respect, however: knowledge of the metric system. Among Gen Xers and millennials, about 7 in 10 correctly identified the number of millimeters in a centimeter, whereas a smaller portion of baby boomers answered this correctly. Perhaps we can cut them some slack: It’s been several decades since baby boomers may have absorbed this content in grade school.

Individuals with repair experience should at least be capable of naming common DIY tools, even if they’re less than an expert in wielding them. Sadly, sizeable segments of millennials could not identify a range of common instruments: Just 73 percent could correctly name a C-clamp, and even fewer knew what to call a hacksaw. Here, knowledge improved with age in all cases. Gen Xers were slightly better at naming every tool, and baby boomers were the best.

Even when asked to identify the purpose of a Spackle knife, just 84.2 percent of millennials could do it. Compare that to 93.3 percent of baby boomers, and the future of America’s walls starts to look a little grim. Millennials were more inclined to guess the tool was used in painting than other generations, perhaps confusing it with the more slender painting knives often used by television’s favorite painting instructor, Bob Ross.

The Demographics of DIY Knowledge 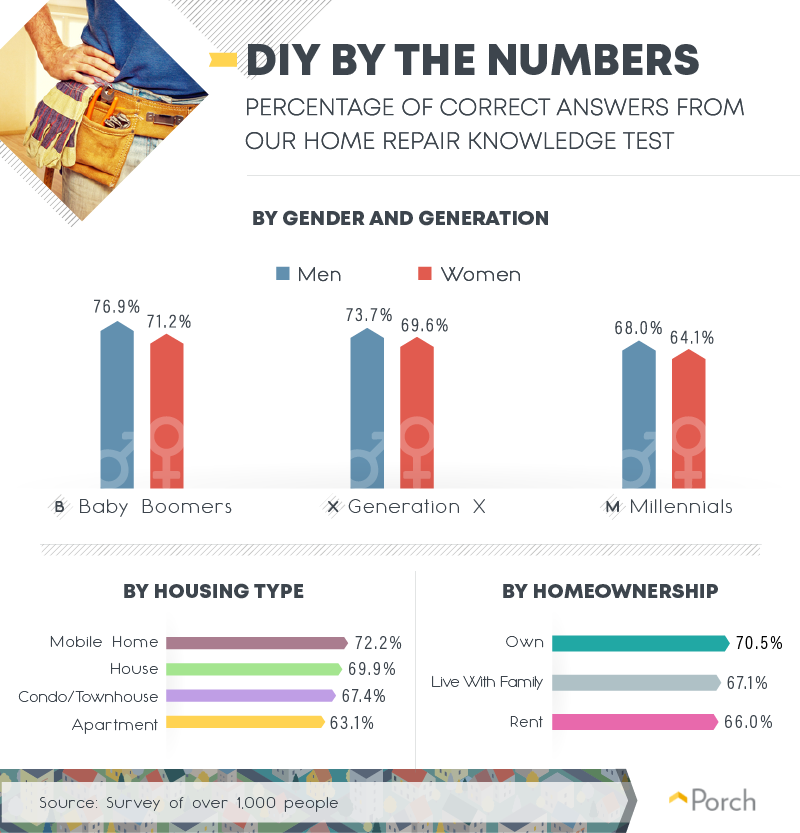 When we consider the results of our quiz in their entirety, it’s clear DIY knowledge declined with each successive generation. This was true among both men and women, as each gender experienced an inverse correlation between knowledge and youth. Regarding both know-how and experience, millennials overstated their DIY abilities when asked if they were handy.

Interestingly, those who lived in mobile homes scored best on our DIY knowledge quiz, outperforming even those who lived in houses. Given the special difficulties that upkeep of a mobile home can entail, perhaps we shouldn’t be surprised that this group was well-informed. Homeownership of any kind was associated with higher scores. In fact, those who rented performed even worse than those who lived with their family. Perhaps that cohort is forced to make repairs around the house rather than chipping in on rent.

No Shame in Calling in the Experts

So maybe some of us tend to overestimate our skills around the home—if your DIY optimism turns disastrous, applaud yourself for the initiative at least. As with any other skill, repairing or remodeling a home requires practice, which you can only gain by making a mess or two. But when things start to get overwhelming, don’t let pride prevent you from getting the professional assistance you need. After all, doing it yourself doesn’t feel so great when the job’s done wrong.

Of course, when you call in the pros, you want to make sure they have more experience and skill than you do. That’s where Porch comes in, with competitive quotes from trusted home improvement professionals. We even offer handy cost estimates for common projects so that you can budget with confidence. Sometimes the only thing better than doing it yourself is realizing you don’t have to.

To compile the data above, we surveyed 1,010 respondents aged 18 and older from Amazon’s Mechanical Turk. The participant gender breakdown totaled 540 women, 469 men, and one individual who identified as neither. Because the data we present rely on self-reported abilities and histories, they may not be perfectly representative samples of all generations and genders. These data are meant solely for entertainment purposes, although we made every effort to represent the data as accurately as possible.

Feel free to use our images and information for noncommercial purposes. When you do, we hope you’ll attribute us by providing a link back to this page. As all DIYers can attest, it feels good to get some credit for your work.

5 Professional Tips Before You Remodel Your Bathroom
August 12, 2020

Loads of Function in a Classic Black-and-White Laundry/Bath
January 24, 2020

Change Your Bathroom, Inc.
4.8
Based on 18 reviews

Nathan Abbott
16:19 12 Nov 20
The guys at the Change Your Bathroom team were awesome. I was able to get an incredible quote and renovated my parents... bathroom just in time to get it listed. I highly recommend them for your remodeling needs.read more

Janet Gray
23:55 30 Dec 19
Jesse performed plumbing work in our home during the holidays. He corrected a horrible plumbing job that another... company supposedly repaired. Jesse installed a 40 gallon hot water heater, expansion tank and a regulator valve. The time it took to assess the problem, undo the incorrect work, then complete the work properly required extra time and a lot of patience. This is not the first time Jesse has done work for us but it is the first time we have written a review. He demonstrated a wealth of knowledge and a ton of professionalism. Thank you from the Bells.read more

Frank Clark
00:07 30 Dec 19
Working with Michelle has been an extremely rewarding and satisfying experience. Her unique combination of solid... experience, encyclopedic knowledge, and an absolutely unerring eye for design yielded superb results in a major master bath remodel. Michelle's patience with questions, ability to provide practical yet fashionable options, and superb professionalism made taking on an extensive renovation a delight.read more

Michael Dean Myers
23:25 28 Dec 19
Outstanding support and service. From Michelle listening to our wants, needs and requests, her first response was... always "Let's see how we can make that happen." She shopped with us to provide us with a wide-range of options and gave us the guidance we needed to put together a great bathroon. Her computer rendering was beautiful and had us hooked immediately on her design. However, the actual finished project far surpassed our expectations. Jesse and Austin paid incredible attention to details and are definitely "The A-Team" when it comes to renovations. Now my wife and I show pictures of our bathroom the way new parents show off their newborns!read more

Sarah Rennie
15:59 27 Dec 19
I needed a new glass custom shower door for steam shower. The price was hard to beat, and from measurements to... installation took no time at all. I'm happy with the quality from the stainless steel handle to hinges everything is solid and stylish. Cant wait to pick out and install my new tub next!read more
Next Reviews
2kFans
5.4kFollowers
647Followers
4.2kFollowers
43Subscribers
809Comments
Related Posts
Go to Top
Send this to a friend